As Canada is officially bilingual, most official documents, signs, and tourist information will be in both French and English. Staff at retail shops, restaurants and tourist attractions will often speak correct English, especially in Montreal. About 8% of the province's residents speak English as a mother tongue, and an additional 31% consider that they can get by speaking it.

The official language of Quebec, however, is French -- or, more specifically, Quebecois French. Isolated from France for centuries, and unaffected by that country's 19th-century language standardization, Quebec has developed its own dialect of French. The continental variety -- called "international French" or français international here -- is well-understood, and something closely approximating it is spoken by broadcasters and many businesspeople. While Quebecers understand European French, European tourists may feel lost until they grow accustomed to the local accent(s).

There are a few main differences between Quebecois French and French-from-France. One is that in Quebec it's relatively common to tutoyer (use the familiar tu second-person pronoun) for all and sundry, regardless of age or status (though there are common exceptions to this in the workplace and the classroom). In asking questions, one uses inversion (Aurais-tu du sirop?) more often than Est-ce que, and sometimes just inflection (Tu aurais du sirop?). Finally, there are a number of vocabulary words that differ, particularly in very informal contexts (for example, un char for a car, rather than une voiture), and some common expressions (C'est beau for "OK" or "fine"). Overall, however, pronunciation marks the most significant difference between Quebec and European French.

Probably the most puzzling difference in Quebec's French is that one will often sacrer (blaspheme) rather than using scatological or sexual curse words. Terms like baptême (baptism) or viarge (deformation of vierge, i.e. virgin) have become slangy and taboo over the centuries in this once fervently Catholic culture. Hostie de tabarnac! ("communion wafer of the tabernacle!") or just tabarnak! is one of the most obscene things to say, and more polite versions like tabarnouche or tabarniche are equivalent to "darn" or "fudge!"

Although sacre may seem funny, be assured that Quebeckers do take it seriously. Don't sacre any time you don't really mean it!

In Quebec, language is identity. Be extremely careful when talking about language, and don't assume that anyone you speak to prefers English to French (or vice versa!). Remember that anglophone (English-speaker) and francophone (French-speaker) are loaded terms in this province; the "third" option, allophone ("others", including Africans, Arabs, Jews, Greeks, Italians, and Portuguese) is also a "code word" with some racist overtones. Many francophones view any decline of the French language as an eradication of their culture and heritage; even a joking "Why can't you all learn English?" sounds a lot like "Why don't you all just die?"

Although some Quebeckers are proudly Canadian, more than a few feel antagonized by "English Canada" and may not respond well to anglophones regardless of their descent. Do not become flustered if you are unable to find someone who speaks English right away. It is highly likely that the people to whom you are speaking do understand you, but lack the confidence and command of the language needed to answer you in your language of choice. Insisting on the use of English is likely to ruffle some feathers. It is better to make an effort to speak in French, even if it is only a few words.

The issue of separation -- or, as some Quebecois call it, sovereignty -- is an extremely complicated and emotional issue that is almost sure to cause hard feelings if you bring it up. Also, note that even residents who aren't souverainistes seriously speak of Quebec as a pays (country) with national parks, national assembly, and national capital. To further complicate matters, there are innocuous local translations for the word "national(e)" that do not contemplate a sovereign nation-state. The discussion of Quebecois politics is therefore best left to Quebecois.

Quebec is not (quite) Canada. Although it's technically true, you'll see few maple leaf flags, and the media doesn't emphasize connections with the ROC ("Rest of Canada"). Some Quebeckers consider the display of the Canadian flag to be an inflammatory symbol of "Canadian oppression". Phrases like here in Canada or as a Canadian may make your conversational partner ill at ease.

Note also that Quebec is not France. Jokes about French stereotypes (Jerry Lewis, poor hygiene, eating frogs' legs) will bring puzzled stares, or at best show that you have no idea which continent you're on. And comparing Quebecois culture and language unfavorably to France's is probably not a path to go down, either. Although Quebec and France have many ties, the Quebecois typically regard themselves as a distinct culture quite separate from the country that "abandoned" them three centuries ago. The cultures are so divergent that, in extreme cases, Quebecois and François speaking French to one another will not be mutually intelligible due to linguistic differences.

Finally, as with most of Canada (whoops!), Quebec is not the United States. People north of the border will bristle at the suggestion that the two countries are "practically the same". 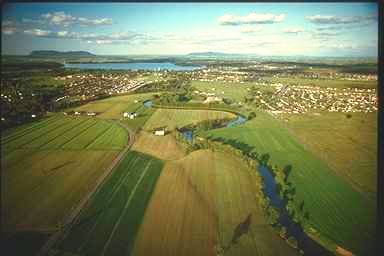 Quebec (French: Québec) is a province of Canada, the largest in size and second to Ontario in population. Predominately French-speaking (French being the official language), Quebec is located in the east of Canada and is situated east of Ontario; to the west of Newfoundland and Labrador, New Brunswick, Nova Scotia and Prince Edward Island; finally, to the south of the territory of Nunavut. The capital of Quebec is Quebec City, its largest city Montreal.

By plane
The newly renovated and expanded Macdonald-Cartier International  (airport code YOW) is Ottawa's main airport with regular arrivals and departures from most major Canadian and many American cities. Services outside North America, however, are limited to a daily flight to London and most Ottawa-bound passengers will find themselves transiting through Montreal or Toronto.

Macdonald-Cartier is easily reached by public transit or taxi and most of the major car rental agencies have a presence at the airport terminal in the parking garage. A taxi to downtown hotels should cost between $20 and $30. There are also hotels within minutes of the airport and a less than $10 taxi ride.

To reach downtown via public transit, hop on the #97 bus and get off at the Rideau Centre transitway stop (approx. 14 stops), which is also called Mackenzie King. If you take this route before 6:00am you will take the more meandering early morning route, but will still get to Mackenzie King. To get to the train station you also take the #97 bus, but get off at Hurdman station and take the #95 eastbound bus to the next stop which is the train station. Bus fare is $3 for 1.5 hours, or $7.25 ($6 pre-purchased) for an all-day pass.

By bus
There is a Voyageur /Greyhound  terminal in Ottawa with regular service to Montreal, Toronto and all other cities in North America. The bus terminal is downtown on the corner of Catherine Street and Kent Street, between Bronson Avenue and Bank Street. Though the bus terminal is downtown, a 15-20 minute walk will get you to most hotels and downtown attractions. Alternatively, a 5-10 minute local bus ride will do the same. (Bus #4, with its stop around the corner from the terminal on Kent St., is the bus you'll want to take.)

By train
Passenger train service is run by Via Rail  in Canada and the train station in Ottawa is less than ten minutes from downtown by car, taxi or bus. There are several trains daily leaving for Montreal, Toronto and points in between. The train station is on a high frequency bus route (#95) and takes only 5 minutes to get you downtown.

By car
By car, Ottawa is about a 4.5 hour trip from Toronto via the 401 and 416 highways. Montreal is 2 hours away via highway 417. The American border at Ogdensburg, NY is only 45 minutes away to the south, and the border at I-81 is a little further west at an additional 1 hour's drive.