BC is a large province. The most convenient way to get to much of the province is by air. However, this can be quite expensive. It is often more expensive to fly to some point in BC than it is to fly to Europe. Vancouver is the regional hub for most air service within BC. Float planes can also be convenient for accessing many coastal locations.

Getting around here is not always easy. Many worthwhile destinations are outside of the cities and not accessible by public transportation options. This makes renting a car quite a popular option for getting around. If you look around however, you will find other options, mostly buses of some variety or another.

Pacific Coach Lines and Greyhound  operate standard bus service on some of the more popular routes between cities. Sometimes you can arrange to be dropped off at points in between, and in the summer, many different guided bus tours are available. Bigfoot Adventure Tours  runs a unique service on less traveled routes that is a combination between "just getting you there" and a tour of some very worthwhile destinations. They have a number of quite flexible packages available, many of them connecting the coast with popular destinations in the Canadian Rockies.

You will also find that the ferry service (provided by BCFerries ) is indispensable to access many island and coastal communities. Some of the smaller islands can be visited on foot or by bicycle, but in many cases additional road transportation is necessary. Although ferry service is generally reliable, taking an automobile on board is rarely cheap, and you will likely find it cheaper to take the ferry as a foot passenger and rent an automobile from your destination. If you are taking bus service across a ferry, you should confirm when buying your bus ticket that the ferry fare is included.

  International Buddhist Temple is the most authentic example of traditional palatial Chinese architecture in North America. It is an edifice straight out of the Chinese past, as it resembles any authentic temple that can be found along the banks of the Yangtze River, where one of the worlds oldest civilizations originated. Come explore traditional Chinese art, culture, and the Buddhist philosophy inside this magnificent place. Free admission.

Although Canada is officially a bilingual French/English country, you would be hard pressed to find many French-speaking people in BC. Services from the federal government are officially available in both English and French. Provincial and municipal governments operate in English only. Some businesses, especially in Vancouver and Victoria offer services in a number of languages (primarily Asian ones). Banks sometimes indicate by a sign in the window which languages are offered.

At one time Chinook Jargon, a trading language, was common and almost became the official language of BC. Now there are very few speakers of the language, but many terms from the language are common slang terms in BC.
Cheechaku - Newcomer (more common in Northern BC and Yukon).
Chuck - The water (usually the ocean).
High Muckamuck - The chief, or boss.
Kultus - Bad or worthless.
Skookum - Strong, powerful, or impressive.

BC was the sixth province to join the Confederation of Canada, in 1871. Being on the Pacific, it has always had a strong Asian influence. The indigenous people of BC have been called Indians or Native Canadians, but now the generally accepted term is First Nation.

Prior to arrival of Europeans BC was a very prosperous area. This was largely due the abundance of salmon. This was demonstrated by the advanced culture that existed in BC. There were literally dozens of separate languages and peoples in BC. Initially the arrival of Europeans was a positive relationship. However, eventually the Europeans brought smallpox. In a particularly disgraceful occurrence there were cases where individuals intentionally spread Small Pox amongst the First Nations. Small Pox decimated the First Nations people of the coast. There were a number of communities that were entirely wiped out.

Many First Nations people were encouraged or even forcibly required to send their children to residential schools during the early to mid 20th century. These schools were government sponsored and church run. The primary intent of the schools was to assimilate the First Nation population. Children were not allowed to speak their native languages or return home to visit their family. Many of the First Nation communities have being trying to revive their culture and are now often the center of much of the ecotourism industry.

With a few exception, the BC first Nations of BC (unlike the rest of Canada) have never signed treaties or officially ceded their territory to Canada. Therefore the official ownership of much of the province is contested as the First Nations claim much of the province as their territory. The courts have generally acknowledged that there is a basis for the claims based on historical use of the land and has urged the governments to negotiate a settlement to these claims. Settling these land claims is an enormous issue that the Province and the Country have been trying to do. So far only one modern treaty has been signed in the Nis'ga territory in Northern BC. 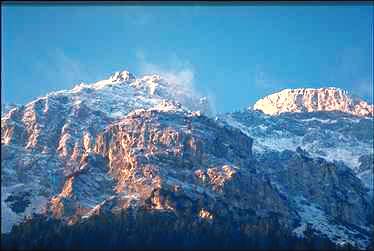 Like in most places worth visiting, there is a little something for everyone in this region. However, you will want to spend at least some time outside of the main cities in this region, and if you enjoy a very active and adventurous vacation, there are many options here to explore. "Ecotourism" is an often mentioned attraction in this part of Canada. Whether backpacking in the majestic forests or coast mountains, or kayaking through the many groups of islands, getting off the beaten path is sure to lead to a memorable trip.