By Plane
 Regina International Airport .Only minutes from downtown Regina, it has four gates which handle flights to major centres in Canada as well as daily flights to/from Minneapolis via Northwest Airlines.

By Car
Regina sits along the Trans-Canada Highway and is a 40 minute drive east of Moose Jaw. Saskatoon is 2.5 hours to the north, Calgary is 7 hours to the west, and Winnipeg is a 5 hour drive to the east

By Bus
 The Saskatchewan Transportation Company  STC is the primary mover of people and freight in the Province of Saskatchewan. the STC Terminal is located downtown, and is also served by other bus lines such as Greyhound

Regina is the capital city of the province of Saskatchewan. It is located in the south part of the province. There is an RCMP training facility nearby. 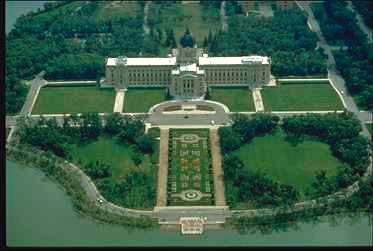  The Royal Saskatchewan Museum  an interesting natural history museum that describes the features of the province.
 Willow Island  This Island on Wascana Lake is both open to the public and available for group bookings. A pontoon boat which seats 12 passengers is used to transport people back and forth from the Island.
 Mackenzie Art Gallery  Major touring exhibits, Gallery Shop and 175 seat theatre. Tours available.
 Saskatchewan Science Centre  Over a hundred permanent, hands-on exhibits, live stage shows, amazing Gyro-Gym, and one of the tallest climbing walls in Canada
 Kramer IMAX Theatre  one of 200 such theatres in the world. It is one of the most dynamic ways for people to experience the places, people, and principles of science and nature.
 Casino Regina and Show Lounge  Casino Regina is located in a beautiful historic train station. With almost 2 million visitors every year, it's Saskatchewan's top tourist draw.

Saskatchewan is known for the largest per-capita ratio of restaurants to citizens, so there is a wide variety of places to choose from. Aside from the regular chains, here is a list of local favorites:
  The Free House  on Albert is a popular spot for a tasty lunch or for chilling out in the evening. Popular with the office and university crowd, the food and service are excellent, but you may find it a little too busy at certain times of the day.
  Neo Japonica , the ultimately authentic Japanese restaurant, is one of the few places in Regina that is consistently endorsed by national reviewers. For those who don't have the cash to go completely authentic, a few other Japanese restaurants have cropped up lately that are also quite good. They include Hanabi , Michi Sushi  and Teppanyaki .

For those looking to check out a bar or night club in the evening, Regina's Old Warehouse district is the place to be. There are at least 6 bars and clubs on Dewdney Ave between Albert and Broad street, with more bars within walking distance down both Albert and Broad, including the excellent Gaslight Saloon .