  Harvest Jazz and Blues Festival - Usually held in the middle of September and should not be missed. It is a very beautiful time of year and the festival music is top notch.
  Walking/biking trails. There are many to enjoy as well.
  Calithumpians Tour & Theatre Company Established in 1979 Calithumpians Theatre Company continues to provide the humorous and historical theatrical entertainment that they have become known for locally and throughout North America.
  Fredericton Golf & Curling Club 331 Golf Club Road 506.458.0003
  Mactaquac Golf Course
  Mactaquac Park 506.363.4747
  Science East
  York-Sunbury Museum 571 Queen Street
  New Brunswick Sports Hall of Fame

  Boyce's Farmer's Market - This is the place to be Saturday morning; it is not to be missed! Get there early because by 10:30 it gets unbearably busy. The samosas are very tasty. So much so, people seem to push and shove to get in line for them! The German bakers, fresh orange juice and the sausages are awesome.
  Cultures Boutique An international gift store operated by the International Department of the Fredericton YMCA.
  Urban Almanac 75 York Street. This shop has a wonderful assortment of gifts that you won't find anywhere else.
  Backstreet Records 384 Queen Street. Backstreet has a large inventory of rare and hard to find selection of disks and records. It also has lots of used albums.
  Westminster Books 445 King Street. Westminster is the place to find books from local authors and maritime books.
  Reid's Newsstand & Cafe 435 King Street, (506) 454-5333
  Tony's Music Box 396 Queen Street 506.458.8286

  The University of New Brunswick founded in 1785.
  St. Thomas University  is the province's only Catholic university and has been located in Fredericton since 1964, when it moved from its Chatham, New Brunswick campus.
  New Brunswick College of Craft and Design

  Miramichi. To the north-east.
  Moncton. To the south-east.
  Edmundston. To the north-west.
  Quebec. To the north-west.
  St. Andrews. To the south-west.
  United States. To the south-west.
  Saint John. Due south.
  Marysville. A historic mill town.
  King's Landing Historical Settlement outside Fredericton north on the Trans-Canada Highway. King's Landing is a 300 acre (121-hectare) outdoor living history museum. The Landing recreates the sights, sounds and feel of rural New Brunswick in the 1800s. Staff, with authentically reproduced costumes work in the homes, shops, school, church, and theatre. Enjoy vintage dining, and unique gifts all in the spectacular backdrop if the St. John River valley. Kings Landing was the winner of Attractions Canada Top International Attraction Award in 1999. 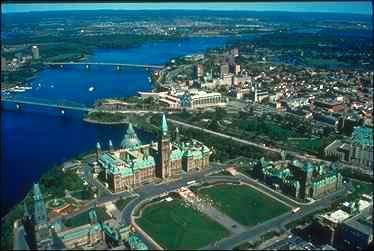 The city is situated in the west-central portion of the province and, along with Moncton and Saint John, is one of the main urban centres in Southern New Brunswick. The St. John River flows in a west-east direction, bisecting the city and providing the dominant natural feature for the municipality.