Banff is the larger of the two towns in Banff National Park, nestled in the mountains. It is located about an hour's drive west of Calgary. Like many mountain cities, Banff has a very different character in winter and summer. 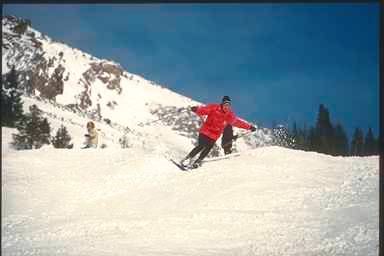 Winter
Banff national park is home to three outstanding ski resorts all within easy drive of the Banff townsite. Driving to the hill is not strictly required, as most hotels offer a ski bus to take you from the hotel to the mountain of your choice and back again.

 Lake Louise ski resort is likely the most well known, and host to a Women's world cup event every winter. As such, it is also the busiest and most touristy. It is located close to the Lake Louise townsite.
 Sunshine Village is located a few kilometers west of the Banff townsite. In recent years, this hill has improved greatly, with more expert terrain and better lifts, it is a personal favorite. It also receives more snow than the other two resorts and benefits from a higher elevation and a generally longer ski season. Also fantastic scenery. It is the only resort of the three to have on-hill accommodation.
 Norquay is the closest mountain to the Banff townsite. Lodge is not much good for breakfast - lunch and beer on the deck can't be beat however! Worth noting that Excalibur is North America's steepest groomed piste.

All the ski hills are busier on the weekends. Lake Louise tends to get icy if it hasn't snowed in a while, but with fresh snow is hard to beat. Sunshine Village has been giving them some competition with their new terrain and improvements however. Especially in the early season, pay attention to how many runs are open and how much recent snow has been received in the snow reports - they are better indications of the conditions than the generic conditions ratings given by the hills (the conditions are always at least 'good' according to their ratings).

If you arrive before December 31 and you intend to ski at least 3 days at Sunshine Village, or a combination of three days at Sunshine and at Marmot Basin in Jasper, consider buying a Sunshine-Marmot card. The card costs about the same price as one lift ticket. The first, third and seventh times you use the card you get a free lift ticket, all other times you get $10 off (you are ahead quite a bit by the third day). These cards can be purchased on the hill (either Sunshine or Marmot Basin), or also at Safeway stores in Edmonton and Calgary, and are valid at Sunshine Village in Banff and Marmot Basin ski resort in Jasper.

 Apres Ski  - Banff Upper Hot Springs - All the amenities of a modern facility are featured in this splendid, historic spa and bathhouse  against a backdrop of spectacular alpine scenery. You will luxuriate in the comfort of soothing hot water where travelers have come to "take the waters" for more than a century.
 Club Snowboard/Ski - One of the best Snowboard/Ski schools.. Groups are 4-6, ours was 4 for the first session then 2 for the next (almost private tuition!). Snowboard methods do vary from European, they tend to teach you to "surf" on snow rather than carve as you would on ski's. Craig Gaunce has the patience of a saint and will get you smoothly linking turns on blacks - concentration is adaptability to terrain rather than speed - if you can adapt then nothings going to faze you! 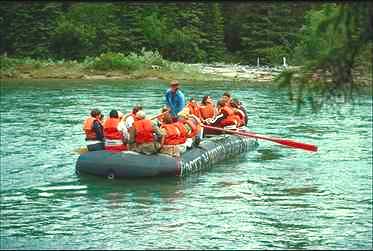 Summer
 Cave and Basin National Historic site.  See the birthplace of Canada's National Park system. Where hot sulfur springs were found and the original bathhouse was built in 1887. There are also a couple of short nature trails.
 Banff Upper Hot Springs - All the amenities of a modern facility are featured in this splendid, historic spa and bathhouse  against a backdrop of spectacular alpine scenery. You will luxuriate in the comfort of soothing hot water where travelers have come to "take the waters" for more than a century.

Accommodation is plentiful in Banff, slightly cheaper than Lake Louise, and slightly more expensive than Canmore, located outside the park. Most hotels are located along Banff Avenue or on Tunnel Mountain Road.

 If you are staying in the Banff/Lake Louise area and don't mind the slightly longer drive, you may also consider the newly opened Kicking Horse Ski resort just over the border in Golden, British Columbia.
 Drive along highway 1A west of Banff.
 Johnson Canyon hiking.
 Bow Falls is located close to the Banff townsite.
 Peyto Lake is located 40 km north of the town on the Icefields Parkway.
 The Banff Hot Springs dried up due to the recent drought years, but you can still go there for a dip in their hot pool after a long day.